Compare prices from multiple car hire suppliers in Portimao to find the best available deal. A few of the car rental companies we compare include Gold Car, Budget, Avis, Hertz, Sixt and many more. 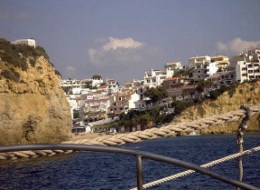 Portimao is a Portuguese town located in the Algarve region in southern Portugal, along the coast. It was formally known as Vila Nova de Portimao until 1924 when it was incorporated. The town boasts 41,000 inhabitants (2009) and is one of the most populated areas in the entire region.

Portimao is known for its sporting events, especially the Mundialito de Futebol de Praria – a beach soccer tournament held every year. Other sports that are popular in the area include kitesurfing and surfing. Portimao is also known for the annual Portimao, Portugal Match Cup, a prestigious sailing even part of the World Match Racing Tour.

The town is known for its amazing beach – Praia da Rocha. It is an extremely popular holiday resort destination for many all around Europe. There is also the Fort of Santa Catarina, known as the Forte de Santa Catarina in Portuguese. It is a fort that defended local settlements as well as the estuary of Rio Arade. It was built during King Philip III’s reign.