Compare prices from multiple car hire suppliers in Ponta Delgada to find the best available deal. A few of the car rental companies we compare include Gold Car, Budget, Avis, Hertz, Sixt and many more. 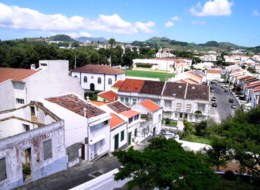 Ponta Delgada is a city located on the Portuguese island of Sao Miguel along the Azores archipelago. The population of Ponta Delgada is at 64,516 inhabitants (2001). Since 1976, Ponta Delgada is the capital of the Azores. The city is full of a number of secular and religious festivals throughout the year, including the Senhor Santo Cristo dos Milagres.

The primary tourist attraction in Ponta Delgada is the Lagoa das Sete Cidades Furnas Villa do Nordeste. It is a sightseeing tour that takes individuals to places like Furnas, which is full of natural hot springs as well as the Gorreana Tea Factory. Another well known destination is lagoa do Fogo, which has beautiful volcanic landscapes and amazing scenery along the beaches. Noreste is also a great place to find waterfalls, amazing gastronomy, and beautiful views of Sao Miguel.

The city of Ponta Delgada is serviced by the Jaoa Paulo II Airport (PDL), also known as the Ponta Delgada Airport. It is located fewer than three kilometers from the city and is the busiest airport in all the Azores.