Compare prices from multiple car hire suppliers in Madeira to find the best available deal. A few of the car rental companies we compare include Gold Car, Budget, Avis, Hertz, Sixt and many more. 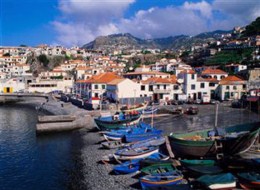 Madeira is an archipelago in Portugal, located less than 400 kilometers from Tenerife, Canary Islands. The largest city in Madeira is Funchal, which is also the capital city of Madeira. Madeira is a population of 267,938 (2011) and is 801 square kilometers in size. It is a popular year round resort destination for millions of tourists from Europe and all over the globe. The area is well known for its Madeira wine, beautiful landscapes, and hosting the largest fireworks display around the globe for New Years.

Tourism is extremely important in Madeira and as such, there is much to see and do. Porto Santo and Calheta are well known for their coastal beaches. Other things to see include the Levadas, which is a system of aqueducts that were built from 1461 to 1966. There is also Cabo Girao, one of the highest ocean cliffs in the world. The volcano caves, Sao Vincente Caves, are also extremely impressive.

The entire archipelago of Madeira is serviced by the Funchal Airport (FNC), formally known as the Madeira Airport. There are a few daily flights that go between some of the major cities in the country, such as Porto and Lisbon, to Funchal. The airport offers its services to a number of international and charter flights, especially during the summer months of May through October. Some of the airlines that fly to this airport include Air Berlin, EasyJet, Finnair, Iberia, Luxair, and Thomas Cook Airlines.