Compare prices from multiple car hire suppliers in Lagos to find the best available deal. A few of the car rental companies we compare include Gold Car, Budget, Avis, Hertz, Sixt and many more. 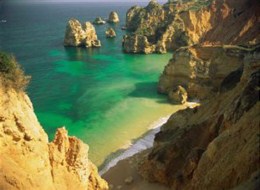 Lagos is a Portuguese city located in the Algarve region in the southern part of the country. It boasts a population of 30,755 inhabitants (2011) and covers 212.99 square kilometers of land. Lagos is one of the most visited locations in not just the region, but within all of Portugal because of its beaches, restaurants, hotels, bars, and vibrant summer life. Lagos is also the historic center for the Age of Discovery in Portugal.

Some of the beaches in Lagos include Meia Praia, Praia Solaria, and Praia de Batata (which is known for holding a number of music festivals during the summer months).

Other things to see in Lagos include the Ponta de Piedade, where individuals can take boat tours to see some of the natural caves in the area, the harbor which houses a lively fish market, and the Bone Chapel.

Lagos is serviced by the Faro Airport (FAO). It is located just 62.9 kilometers from the center of the city.