Compare prices from multiple car hire suppliers in Evora to find the best available deal. A few of the car rental companies we compare include Gold Car, Budget, Avis, Hertz, Sixt and many more. 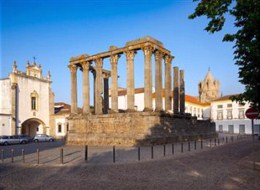 Evora is a Portuguese city located in the Aletejo region. It boasts a population of 41,159 inhabitants (2004). The entire city is listed as a UNESCO World Heritage Site. It is also a member of the Most Ancient European Towns Network. This is because of the large number of monuments dating back from multiple historical periods, including a Roman era temple, as well as the medieval walls that still enclose the historical city center.

The Aqueduct of Silver Water is one of the primary sites. It was built between 1531 and 1537 to get fresh water to the city. The Cathedral of Evora was built between the years 1280 to 1340 and is one of the most important Portuguese Gothic monuments. There is also Giraldo Square in the center of the city, University of Evora, Palace of the Dukes of Cadaval, the Roman Temple of Evora, and the Cromeleque dos Almendres.

The city of Evora is serviced by the Lisbon Portela Airport (LIS), and it is located 83.06 kilometers from the city.