Compare prices from multiple car hire suppliers in Estremoz to find the best available deal. A few of the car rental companies we compare include Gold Car, Budget, Avis, Hertz, Sixt and many more. 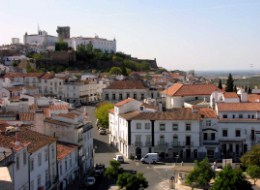 Estremoz is a city located in the southern Alentejo region in Portugal. It is the largest of the “marble towns” in the region. The city is known internationally for fine to medium-grained marble in a variety of colors, including white, pink, cream, black, and grey. The pink marble, known as Rosa Aurora or Estremoz Pink, are the most popular. Those who walk around the city will note quickly that marble is used just about everywhere, from doorsteps to cobble stones.

Places of interest in Estremoz include the Medieval Castle, the Historical Center, the fourteenth century Torre de Menagem, the sixteenth century Church of Santa Maria, and a number of museums, including the Museu Municipal and Museu de Alfaia Agricola.

The city of Estremoz is serviced by the Lisbon Portela Airport (LIS), and it is located 134.72 kilometers from the city.