Compare prices from multiple car hire suppliers in Coimbra to find the best available deal. A few of the car rental companies we compare include Gold Car, Budget, Avis, Hertz, Sixt and many more. 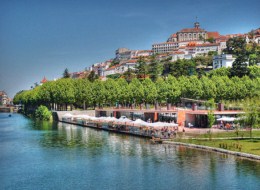 Coimbra is a city that was once the capital of Portugal during the High Middle Ages. It is also home to the University of Coimbra, which is one of the oldest universities throughout Europe and the oldest academic institution throughout the Portuguese speaking world. The city is also known for housing a number of archaeological structures, some of which date back as early as the Roman era, including well preserved cryptoporticus and aqueduct.

The city boasts a population of 101,069 inhabitants (2001), and it is one of the primary urban centers throughout Portugal after Lisbon and Porto.

Some of the other things to see in Coimbra include the Botanical Gardens, the Old Cathedral, the New Cathedral of Coimbra, Medieval Downtown, Mermaid’s Garden, and the Machado de Castro National Museum.

Coimbra is serviced by the Francisco de Sa Carneiro Airport (OPO), informally known as the Porto Airport. It is located approximately 118.65 kilometers from the center of the city.