Compare prices from multiple car hire suppliers in Chaves to find the best available deal. A few of the car rental companies we compare include Gold Car, Budget, Avis, Hertz, Sixt and many more. 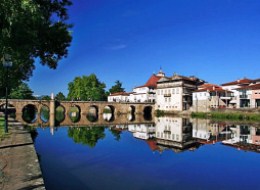 Chaves is a municipality located in northern Portugal. It is the second most populated municipality in the Vila Real district). Chaves boasts a population of 44,186 inhabitants (2004) and is 591.3 square kilometers in size. It is just ten kilometers from the southern border Portugal shares with Spain.

Other things that still exist is a Roman era bridge, the Castle of Chaves, Church of Santa Maria Maior, and the Chapel of Sao Caetano.

Chaves is serviced by the Francisco de Sa Carneiro Airport (OPO), informally known as the Porto Airport. It is located approximately 114.66 kilometers from the center of the city.