Compare prices from multiple car hire suppliers in Braganca to find the best available deal. A few of the car rental companies we compare include Gold Car, Budget, Avis, Hertz, Sixt and many more. 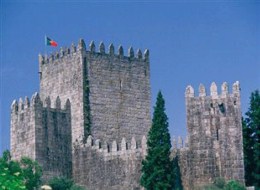 The city of Braganca is located in northeastern Portugal in the Norte region. The city boasts a population of 34,774 inhabitants (2001) and is 1,173.57 square kilometers in size. The city is known for some of its local souvenirs, including wicker baskets and ceramics.

The city’s primary attraction is the Cidadela. It is almost a separate village that lies above the town and showcases a distinct medieval flavor. Inside the Cidadela there is the Torre de Menagem, a large keep belonging to a castle built for the Dukes of Braganca, the last royal family in Portugal. Also inside is the Domus Municipalis, an eleventh century council chamber, and what is a preaching cross that rises from a prehistoric pig’s back just outside of the castle.

Braganca is serviced by the Braganca Municipal/Regional Airport (BGC). It is located 5.79 kilometers from the center of the city. It offers daily scheduled flights via Aero VIP to the Lisbon Airport (LIS) and Vila Real Airport (VRL). It does not service any other national or international flights. To reach the Braganca airport from outside of Portugal, individuals must fly into one of the two previously mentioned airports and then take a flight into the city.