Compare prices from multiple car hire suppliers in Aveiro to find the best available deal. A few of the car rental companies we compare include Gold Car, Budget, Avis, Hertz, Sixt and many more. 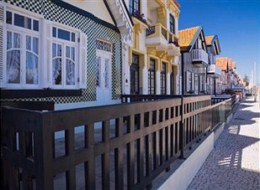 Aviero is a city located in the Centro region of Portugal. It boasts a population of 73,559 inhabitants (2006), making it the second most populated city in the region. Aviero is 199.9 square kilometers in size. The city is known throughout Portugal for ovos moles and trouxas de ovos, traditional sweets that are made with eggs and “tripa de aviero.” Because of the number of canals and boats throughout the city, it is sometimes referred to by its nickname – the Portuguese Venice.

There is much to see in the city, including the Moliceiros of Aveiro, the Lighthouse of Aveiro at the Praia de Barra, the Cathedral of Aveiro, and the old train station. Many individuals like walking through the squares and streets because they can see interesting things like the typical azulejo facades often found in the area.