Compare prices from multiple car hire suppliers in Agueda to find the best available deal. A few of the car rental companies we compare include Gold Car, Budget, Avis, Hertz, Sixt and many more. 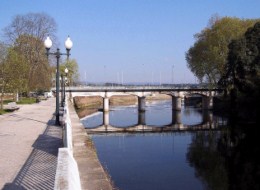 Agueda is a Portuguese municipality located in the Centre region. The municipality boasts a population of 49,857 inhabitants (2008) and is 335.28 square kilometers in size. It is considered a very important industrial and commercial center as it is located in a very fertile area in the country. Some of the main sectors are fruit orchards, corn harvests, as well as vineyards. The wines that come from Agueda are extremely well known.

The area is also well known for traditional clay pottery, knit craftworks, handmade baskets, and tannery products. Its most significant contribution to Portuguese cuisine is the suckling pig.

Agueda is serviced by the Francisco de Sa Carneiro Airport (OPO), informally known as the Porto Airport. It is located approximately 78.22 kilometers from the center of the city.